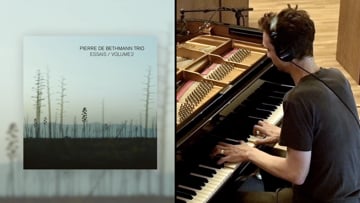 Fourth production of the ALEA label, second volume of Pierre de Bethmann’s ESSAIS, two years and nearly sixty concerts after the first volume was released in 2015.
With Sylvain Romano on the double bass and Tony Rabeson on the drums, the trio pursues its journey, gleaning ideas from every new shared experience, continuing its exploration of a variety of musical traditions, subjecting each member’s choices to different arrangements, and above all to the spirit of the moment.
The same spirit which led the three musicians back to the Recall Studio in June 2017 to record their new album, in a setup drawing each time closer to live conditions, in an exceptional setting capable of suspending time and capturing the raw energy of musicians only too eager to play.
All of this results in a selection of ten pieces dating from 1707 to 1985 – written by different composers from the two sides of the Atlantic Ocean – which some will regard as standards.
A new album also conceived as a big thank you to those who programmed, hosted, and supported the trio on its different journeys over the last two years, and to those who will inspire the journeys to come.